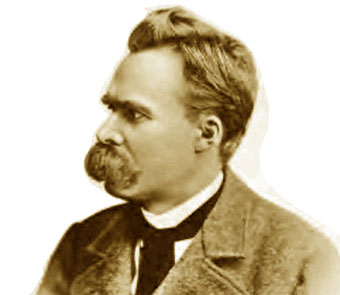 “God is dead, “ Nietzsche’s madman declared, “God is dead and we have killed Him!” Through his parable of the madman, Nietzsche was delivering a powerful social commentary. Speaking to a society that no longer believed in the existence of God yet still lived according to the memory of Christian morality, Nietzsche warned that things would certainly change.

You have done away with the concept of God, Nietzsche was saying, now do the necessary work to develop a system of morality that is not based on deity. Those who still held to the Christian form of morality were clinging to a morality of weakness, of servitude. We don’t want any of this love your enemy, turn the other cheek, the last shall be first nonsense. What Nietzsche proposed instead was a morality of power, of self-assertion. Be strong. Dominate. Pursue “the will to power.” If it tends toward weakness, throw it out. If it increases your sense of power, go for it.

Follow this course, Nietzsche said, and we will arrive at something called the Superman. Philosophers are typically careful to explain that Nietzsche’s German word would be better translated “Overman” than “Superman.” Superman, they tell us, conjures up images of capes and underwear worn on the outside of the pants. It carries a sense of superpowers and inhumanity. Well, so what if it does? I’m not a philosopher, so I don’t need to be as careful with my categories. It seems like this is exactly the sort of thing Nietzsche was proposing (cape and exo-underwear aside).

Nietzsche’s Superman was the next phase for mankind. Man has a certain dignity because he has risen above the animals. But man is not the last word. He is more of a transition. If we can make it, if we can assert ourselves and continue to develop, then we will arrive at the Superman. Our caped-crusader Superman is a superhero precisely because he is an improved form of humanity.  Nietzsche’s Superman may as well be a superhero, because he embodies the improvement that needs to be made in order for mankind to reach his destiny.

This Superman is the one who does what he wants—not in such a way that he is helplessly driven by his lusts, for that too would be a sign of weakness, but in such a way that he does exactly what he means to do. The Superman would be free, unconstrained by obligation, servitude, and especially deity. His life would be a declaration of independence, an autonomous hero to surpass what mankind has been able to achieve.

Personally, I can’t imagine a worse future for humanity. Is that what we really need, a post-human being who is more assertive and dominant? Who stands on her own autonomy and does exactly what she means to do at every moment? That’s a terrifying thought.

Nietzsche’s line of thinking fits well within a Darwinian view of life. But if there is any truth to the biblical statement that “The heart is deceitful above all things, and desperately sick” (Jer. 17:9), then Nietzsche’s Superman would be the equivalent of a Super Villain. From the time of the ancient Greeks (and even before), people have assumed that what they needed was a more powerful version of themselves. And thus the Greek gods were basically amplified humanity: superhero versions of themselves, with all of the desires and vices of their human counterparts. Yet this didn’t work out very well in Greek mythology, and we have ample evidence from the history of the world that man cannot be his own savior.

We need a better superhero to rescue us. Someone who has the power to do not just whatever he wishes to do, but the power to transform. Power over the natural world, for example. Or how about power over death? Power to take the dead and raise them back to life. Power to take this clearly broken and hurting world and turn it into something truly and eternally wonderful.