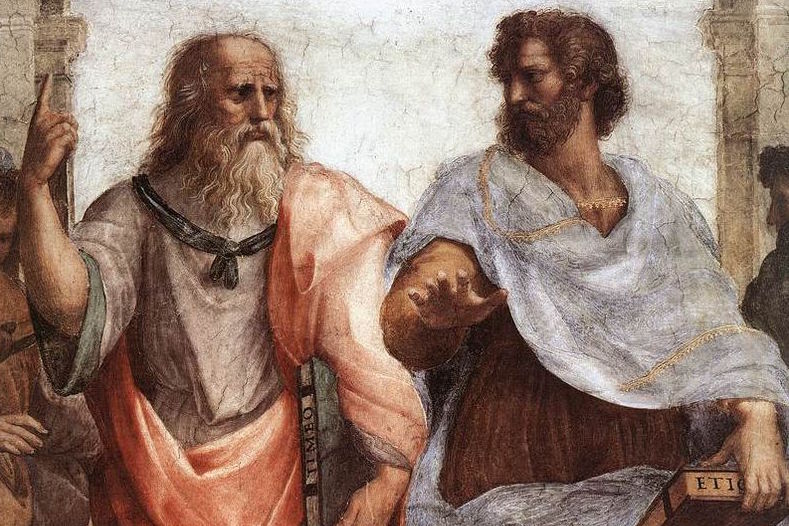 Plato wasn’t the only ancient mind to have a huge impact on the church. In this post, I want to consider another key player: Aristotle. Not many people have had as enduring a legacy as Plato, but Aristotle is far from irrelevant. His writings haven’t had as big of a direct impact on the church, partly because his writings were “lost” for much of church history, and partly because his impact was more roundabout. Even so, the world we live in has been shaped by Aristotle’s influence—not only outside of the church, but inside as well. In fact, you think the way you do in part because of Aristotle’s influence.

Aristotle studied under Plato, and while he advanced the Platonic tradition in many respects, he also turned a lot of Plato’s teachings on their heads. For example, Plato taught that the heavenly world contained “forms” which gave meaning and identity to the individual things on this earth. So there is a perfect chair in heaven that defines chairness, and the chairs on earth are imperfect copies of that chair—they are chairs only insofar as they conform to the heavenly chair. Aristotle, on the other hand, explained that the essence of a chair did not exist in heaven as some universal principle, the essence of a chair lives within each earthly chair.

The implications of this are huge (believe it or not). Aristotle was saying that rather than looking to some heavenly principle to determine the meaning of things on earth, we need to look at the individual things around us, and from there we can find some sort of meaning or essence that we might call a universal principle. Is that making sense? In essence: meaning doesn’t come down from the clouds, it comes from observing the things we can see, hear, feel, taste, and smell. Whereas Plato distrusted the senses, Aristotle believed that truth would be found through the senses.

Basically, Aristotle became the patron saint of modern science. His method of learning was not about revelation (waiting for a voice from heaven), he was all about observation (the scientific method). Beginning with the Renaissance and culminating in the Enlightenment, God was continually being pushed to the fringe of society. People became increasingly confident in man’s ability to explain his world apart from divine revelation. They grew optimistic about man’s ability to approve his world. They saw a golden age just around the corner, and science and reason would lead them there.

Notice that it wasn’t science that was leading people away from God. Rather, it was the assumption that science was capable of explaining everything about our world apart from God. Aristotle gave people confidence that they didn’t need to look to God for the answers, they could find them through observing the objects around them.

And here is where Aristotle began to mess up the church. Christians began to concede that yes, people can explain the world apart from God by observing the natural world. Yet they insisted that you couldn’t know God without revelation. So religion is important for your spiritual life, but everything else can be explained sufficiently through science. It’s an oversimplification, but essentially, the church decided that there were two types of things in this world (spiritual things and natural things) and there were two separate ways of knowing those two types of things (revelation/faith and science).

Ultimately, this box we have allowed ourselves to be placed in has grown smaller and more constricting. The secular world grants us our faith, but we are told that it is a private matter. Faith belongs in our hearts, not our public discourse, our workplaces, or our politics. The amazing thing is that Christians have largely gone along with this.

Aristotle was a wise and fascinating man, but let’s not allow his influence to keep our Christian worldview sequestered off into the realm of private prayer. The Bible still speaks to every area of human existence. We can and should explore the individual things in this world, but we should do so with the conviction that nothing in creation makes sense apart from the Creator.