The Church is a Mystery

So this was most unexpected. We were simply trying out a new church in the area, doing a reconnaissance to see what it was like, to see if I should recommend students attend here, that sort of thing. Neither of us was expecting to be moved, touched, like this.

It was a church of some 400-500 people and they had two morning services. The music was very well done—there were some hints that the worship leader had Hollywood connections in the recording industry. The senior pastor was away on vacation or something, but the staff pastor who preached was rock solid. His style was far more classroom type teaching than preaching, but good meat nonetheless.

It wasn’t a particularly friendly church—only one person talked to us. We made it through the gauntlet of donut tables, coffee stations, and door greeters without a single personal contact. Even the door greeter didn’t say anything or hand us a bulletin. We had to go back later and ask for one. But OK, I guess that is pretty normal.

This is a church that has communion every week. The plate of tiny wafers is passed, then the tray of juice cups. It is done near the end of the service with little or no instruction. Each person can take the elements when they are ready. A bit new to us, but OK. I can flex. As I held the broken body of Christ, and a symbol of His blood, I found myself deep into the presence and communion of Jesus. I was not expecting that. I have sat through hundreds of communion services, and unfortunately can be pretty numb to the beauty and mystery of the elements. But something was different. I was swept away.

We stood to sing the final worship song, and something or Someone filled my soul with such love and emotion that I could not sing. God was truly present in this place; the mystery of the cross became incredibly tangible in a quite intangible way. Tears came down my cheeks, and I realized my wife Dawn had been moved in the same way.

We didn’t know a single person there, still don’t. Only one person talked to us. There are no doubt lots of problems and issues—marriages in trouble, board members who don’t like the pastor’s vision, some who thought the music was too loud or soft or modern or old. But this place is the Body of Christ, the mysterious bride. And that is where the Bridegroom likes to be—with His bride. He was there today, and He revealed Himself in a mysterious way through the elements of communion. So cool. So mysterious. So supernatural. So unexpected.

How often do we expect the unexpected at church? Have we lost our sense of the supernatural and the mysterious?

The Church Is a Place to Feel at Home & Foreign

Avoiding the One-Size-Fits-All Approach to Discipleship 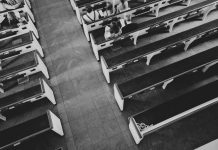 Do Your Church Programs Help or Hinder Discipleship?